What sections are your favorite?

Hey readers, every week in the Dispatch I have a variety of sections such as RubyMotion App of the Week. I’m constantly adding new ones, like this week’s Poll of the Week. Let me know what your favorite sections are, either email me attodd@infinitered.com or tweet at me a @twerth

Help out the community by answering questions on stackoverflow or send me your tips and I’ll add them to next week’s Dispatch.

What editor or IDE do you use when developing in RubyMotion?

12/17/2013 – “Read without the wrapper gem Data Model that you created in Xcode when using CoreData in RubyMotion” by なかむら, in Japanese, translate it in Chrome

12/16/2013 – “RubyMotion Getting Started in RubyMine” by Kawasaki Makoto, in Japanese, translate it in Chrome

12/12/2013 – “I realize the acceptance test in the seventh times RubyMotion × Calabash” by Satoshi Ebisawa, in Japanese, translate it in Chrome

12/12/2013 – “RubyMotion – navigation tabs” by Nicolas Cavigneaux, in French, translate it in Chrome

In case you missed it

I’m happy to see the two WeakRef bugs Ken and I submitted were fixed within a week. On the flip-side they existed in the first place.

This is useful because you get all the normal Ruby string stuff, but you also get the NSMutableString and NSString stuff. There are some cool things in there, check out the docs (and use Dash for your docs)

Here is a cool example, NSArray has the pathsMatchingExtensions method:

A hack to get a strong ref from a weak ref:

Let me know if there is a better way to do this, I really am curious. I’ll be adding a utility method to RMQ that does this.

EXC_BAD_ACCESS By Ken Miller (@seriousken)
If you are getting crashes you can’t explain, especially EXC_BAD_ACCESS, you may be trying to call a method on a released object.  This can happen especially if you’re doing something subtly wrong with a WeakRef.  There’s a secret debugging environment variable you can set called NSZombieEnabled, which will keep the released object around instead of freeing it, and then warn you when a method gets called.  To use it just append “NSZombieEnabled=YES” after your normal rake commands.  See here and here for more information. 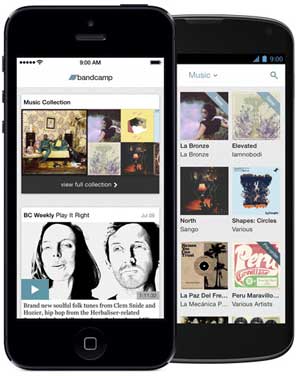 Updated 11/29/2013 – Bandcamp
“The Bandcamp Listening App for Fans gives you unlimited streaming access to your Bandcamp music collection, plus easy access to our radio show, the Bandcamp Weekly. ”

Article over at RubyMotion’s blog

What is RubyMotionQuery (RMQ) you ask? Check out this video or this site

FYI, v0.5 is still in beta, but should be sent out as release/gem this week. I’m having a few WeakRef issues. I started playing around with the new frame system for v0.6. It’s going to be slick.

RMQ combines events and gestures (I chose to just call them events). If you need the recognizer after your gesture has fired, you can retrieve it from the rmq event object (which contains a bunch of stuff), like so:

You can also set the options of the gesture when you create the rmq event, like so: